A STORY OR TWO TO ACCOMPANY YOUR CUPPA…

At Dorset Tea, we love the environment as much as we love a good cup of…
There's nothing better than a long old walk on Boxing Day to get out…
A gift guide for Christmas 2020
Read More 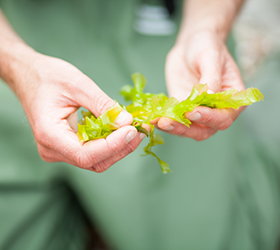 For most people the only time they have knowingly eaten seaweed is “crispy” as part of a Chinese meal. In most cases this is not actually seaweed but spring cabbage! Most people will however consume seaweed several times a week without knowing it as it appears in a wide variety of food products fulfilling different purposes. It is in ice cream to prevent ice crystals forming, it keeps the head on a pint of beer and clarifies wine. Seaweed is also often used as a thickener in sauces, syrups, soups, mayonnaise, salad dressings, and yoghurt.

A common ingredient in Japanese, Chinese & Korean cuisine, seaweed is now being farmed to meet demand. In Ireland and Wales some species have a long history of use and seaweed dishes are part of their heritage. Now, in the UK, interest in seaweed is growing due to its superfood status from being rich in minerals especially iodine, proteins and vitamins. One species has 10 times the calcium of cow’s milk, twice the vitamin C of oranges, and 50 times the iron of spinach! Several British companies are harvesting and processing seaweed with it available in some supermarkets. But seaweed is also accessible to the coastal forager. About a dozen species are eaten, and they are easily and safely identified as the only poisonous family are found in deep water. The key with cooking seaweeds is appropriate treatment for the species - you don’t want to boil them all as a vegetable! 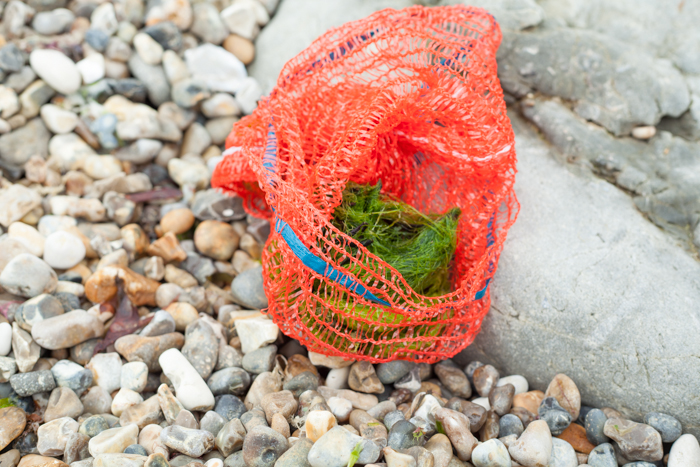 The usual law that applies to foragers, The 1969 Theft Act, covers fruit, fungi, foliage and flowers but not seaweed. Technically to gather seaweed you need permission from the owner of the foreshore (Council, National Trust or private landowner). Below the High Water Mark the landowner is usually The Crown. Choose rocky areas where the water is unpolluted to gather your seaweed. Note the tide times so you do not get cut off and take extreme care – rocks with seaweed on are very slippery.

Seaweed should always be cut with scissors, leaving a third of the length and rinsed in seawater to remove any sand and creatures. It is best put the seaweed into string bags with one species per bag so you don't have to spend hours sorting them out later. String bags allow the water to drain out before you get in your car. If you’re collecting on a warm day, use a cool box to keep them in good condition and rinse them several times in fresh water when you get home. 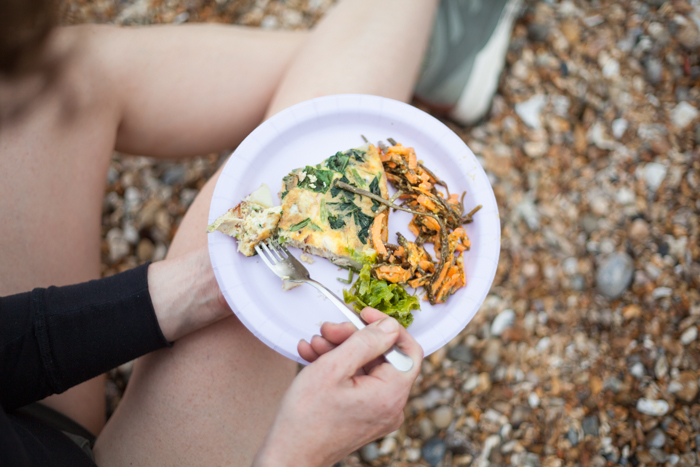 Fresh seaweed has a short shelf-life so many species have traditionally been dried. To dry your seaweed you could use a dehydrator, a low oven or a warm area. You might like to dry it in the garden, but it can smell a bit! Depending upon size you can dry it on trays, drying racks or even the washing line! When it is totally dry your seaweed can be stored in bags or jars for years then rehydrated before using. Fresh seaweed can be put it in sealed bags in the fridge and will keep for 1-2 weeks depending on the type of seaweed.

You should soak seaweeds in fresh water for five or ten minutes before you cook them, to get rid of the saltiness. Some seaweeds like Kelp, Dabberlocks and Dulse can be softened in a marinade that includes vinegar or lemon juice together with other liquids and sweeteners like tamari (a type of soy sauce), ginger juice, honey, etc. The longer the seaweeds marinate, the softer they become. Keep them refrigerated while marinating.

This is a very common species. You can use it in salad with vinegar and oil. You can also dry it then put it in a blender to make green nori flakes. These can be used as a condiment, on pizza, pasta or in bread. Gutweed can be deep-fried for a few seconds - to produce crispy seaweed or a garnish for seafood dishes.

This has a strong flavour, to some tasting peppery to others of raw fish, oysters or even truffles! As it is strong, a teaspoon in a dish is plenty. It can be used in fish salads or smoked fish tart. Pepper Dulse can be dried and used as a pepper equivalent for fish, stir-fries, soups and frittata.

Sugar kelp and its close cousin Kelp (Kombu) can act as flavour enhancers – Monosodium Glutamate was originally derived from it. The Japanese use Kombu and Kombu Royale widely, especially for dashi (stock) for broths / miso soup / noodles. They are also used as in stews or when cooking beans. You can make lovely ready salted crisps baking or deep frying pieces of either. Sugar Kelp contains a natural sugar so it is often dried and added to biscuits, cakes, tarts and cookies.

If on thyroid medication consult your doctor before eating seaweed.  Because of the high iodine content in Kelps you are recommended to have only one meal of them per week.

This thread has been closed from taking new comments.